Memoirs of a Hippie Girl by Ann BeCoy is a Masterpiece!

Memoirs of a Hippie Girl by Ann BeCoy is a work of creative non-fiction. 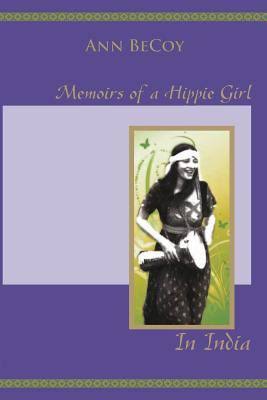 Ann BeCoy recently published her first book entitled:  Memoirs of a Hippie Girl in India which is a work of creative non-fiction. This memoir is a true story she kept secret for forty years.   In 1972 Ms. BeCoy as a tender eighteen-year-old left her dysfunctional family and abusive father to travel to India with a boyfriend she barely knew.

Within the first month, she was kidnapped, trapped and being forced into prostitution.  In order to escape, she became a Hash Courier for some Goa hippies.  She was then arrested and spent the next three months in prison in Bombay.  Her account of her time in the women’s prison in Bombay, where she is the only foreigner, the only white person, are positively riveting.

Ms. BeCoy is a survivor if nothing else.  She survives a riot where she is nearly stoned in a Muslim bazaar, she survives three months in prison where she deals with severe dysentery, cockroaches, and rats.  She survives in India by her wits and her guts and finds her way into various Ashrams. She meets extraordinary men, famous gurus, and famous counter-culture heroes later in Nepal.

Ms. BeCoy is one of the original “Goa Hippie Tribe” as she was there in 1972 at the very first ever Goa party.  She describes a time in India that no longer exists, a time when you could “occupy” the Taj Mahal stoned on LSD.  A time when you could buy dirt- cheap, pharmaceutical –grade, cocaine over the counter from pharmacies in India because the Indians were not aware of “recreational” drug use.

Ms. BeCoy’s accounts of life in India describe the socio-political climate of the day when India was refreshingly free of American influence. She describes a time when India was an entirely alcohol-free society, had no pornography or beauty industry, where the men all dressed like Gandhi and there was no Starbucks.  Ms. BeCoy claims that she saw the same India as the Beatles did three years earlier – an India that no longer exists.

Ms. BeCoys’ accounts of the counter-culture depict more than a romantic notion of hippie life.  She claims it was not all about “peace, love, and harmony” but describes the rip-offs and betrayals that were part of the scene as well.  She gives an honest account of her own naivety, and her own mistakes and poor judgment without resorting to “spin”.

In her memoir, Ms. BeCoy compares the prison system of India to the prison system in Canada as she later describes the thirteen months she spent in a Vancouver Medium Security prison.  Her accounts are very different from “Orange is the New Black” in that her experience occurred in the early 1970’s and prison culture was more restrictive than what is currently portrayed in the popular series. (i.e. there were no “beauty salons” or “yoga classes” or “birthday parties” as described in Ms. Kerman’s story)

Ms. BeCoy describes a time in Canada where if you were a Lesbian they put you in a mental hospital. Being gay was akin to being insane!

Ms. BeCoy’s book deals with the hedonistic lifestyle of sex, and drugs and Rock n’ Roll, but also delves into a deeply spiritual seeking.  Her story is definitely a “coming of age” story, but also a love story and a spiritual journey.  She writes with the freshness, and sincerity of an eighteen-year-old voice and when reading her story one feels one is right there.  This book has already sold nearly three hundred copies in the first year with no marketing whatsoever.  The book appeals to young women, to travelers, to people in the Yoga Community, to people in the “counter-culture” community, to “drug culture”, “Goa Culture” to anyone interested in the historical view of prison systems.

Ms. BeCoys’ book is available on Amazon.com and in bookstores on request.  She is also selling autographed copies of her book privately at www.annbecoy.com

Ms. BeCoy will be interviewed on Whistle Radio on November 5th and is presenting a reading of her work at the Keswick Library on Saturday, Oct. 25th.